Anyone that has worked with a number of surplus war contract M1904 McClellans will likely have run across this variation in the brass mortice plates, also known by the manufacturers name as ‘saddle ovals’.  In general, nearly all McClellans used the smaller, slightly elongated form.  Occasionally, you’ll find a mortice plate that is rounder shape, slightly larger overall.  For years, I noticed these occasional ’round’ plates, until I was fortunate to run into a gentleman that had several boxes of New Old Stock (NOS) hardware from a war contractor company.

Nearly all the brass fitting used on these wartime McClellans was made by the North & Judd Company, of Northfield, CT.  Like most hardware, each piece was identified by a number.  Following a photos (provided courtesy Bill Lawrence) show the two different ‘models’ of saddle plates. 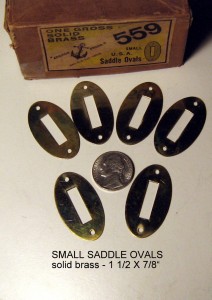 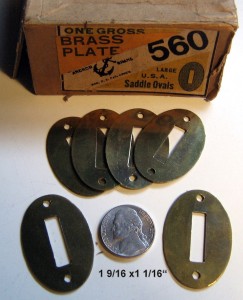 The North & Judd #559 plates are the standard McClellan plates, and the occasional ‘fat plate’ is the #560.  What the intended use of the #560’s was is still unknown to me, but perhaps someone has some details on that question.